Fish production occurs mostly in northern hydroelectric power reservoirs and lakes in Sweden, with some production along the high coast of the Baltic Sea. Today, the market for farmed fish consists of a few species of salmonids but there is an increased interest in farmed species that are currently obtained, for the most part, from wild fisheries. Culturing these species would allow for a consistent volume, predictable deliveries, as well as consistent sizing and quality. There is also interest from a segment of the market to pay higher prices for small-scale niche products, while others require larger volumes and predictable supplies, leaving room for farming on several different scales.

Fish production in the Western world is dominated by open systems, but there are some serious limitations with these systems, especially in areas where strict environmental regulations prevail or where the potential impacts are high. Problems associated with the release of nutrients into the environment, infectious disease control, and problems with fish pens and predators are just some of the issues often named.

This means that the industry is now turning to the development of closed-cage farming as well as land-based fish farming systems in areas where open-cage farming is not acceptable. These land-based recirculating systems are referred to as RAS (Recirculating Aquaculture Systems or Recirculating aquatic system), and consist of technological solutions to remove waste products from the water for re-use. In some areas, open systems pose very little threat if dimensioned properly, (e.g. the above mentioned hydroelectric reservoirs and large parts of the coast of Norway), while in other places (eg. large parts of Sweden’s Baltic coast) open systems are simply inappropriate, and alternatives must be created if aquaculture is to occur at all.

See how a sketch of how RAS works on fiskbruk.se (in Swedish) 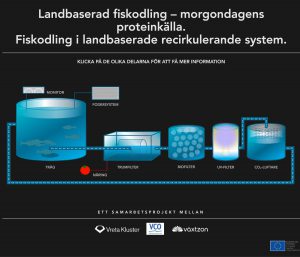 Interest in RAS aquaculture is growing throughout the world. The major advantage of RAS is that you have full control over the system, i.e. you can control temperature, light, feed, etc. and avoid problems with escapes and the spread of infection. Furthermore, nutrients (feed waste, faeces and metabolites) from the farm can be collected before release, creating new products in the form of, for example. feed materials, bio-energy or fertiliser. You can divide these “emissions” into two main parts. The first is the slurry (waste feed and faeces) that are separated through mechanical filters and by sedimentation traps. The sediment is then concentrated using water separation and/or drying.

The second part contains dissolved nutrients in the water. Nitrogen from the fish’s metabolic degradation of protein is removed or broken down to a form that is harmless to the fish until it reaches high concentrations. This oxidation is performed in a biofilter using naturally-occurring bacteria. In most RAS, some water is removed from the system in order to dilute this nitrogen by-product (usually 1-5% of the total volume is released in a system and replaced by new water). However, water containing nitrogen and, for example, dissolved phosphorous products, can be used in an aquaponics for plant production. In Sweden, for example, the growing of tomatoes using this “spill water” is currently reaching commercial levels of production.

A disadvantage often named with RAS is the higher investment and operating costs compared with open systems. But the benefits include faster growth, less disease problems, and farm-placement opportunities that can provide local food for all (RAS production can be placed nearly anywhere where there is access to water, even in the middle of town!).